MENUMENU
Disclosure: When you buy through links on my site, I may earn an affiliate commission.
Home » Products » LED Snowboard Illumination System 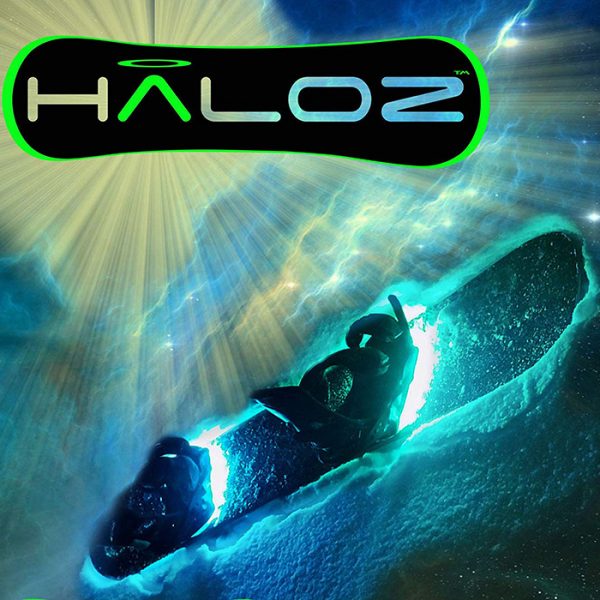 The LED Snowboard Illumination System are a pair of remote controlled, waterproof LED discs that broadcast a powerful 2,000 lumen ring of color and give 360 degree illumination. Never snowboard in darkness again!

I could list ten amazing things about winter that I absolutely love. From how the stars tend to pop in a cold, clear night sky; to the abundance of hot beverage in cozy clothes; and to the beautiful dance of fire in the fireplace. But none would even be almost as amazing as snow!

With winter comes the opportunity to have loads of fun on and in the snow. One of these includes visiting an ice skating rink and joining others for fun! But what is better than that is sliding downhill on a snowboard through waves upon waves of snow splashing around! Simply amazing!

However, most times, the fun has to be over by night time. It is not easy to see well at night and snowboarding could become somewhat dangerous with all the things that could go wrong, especially if the area is not illuminated at all.

That is why you need the LED Snowboard Illumination System by Haloz. 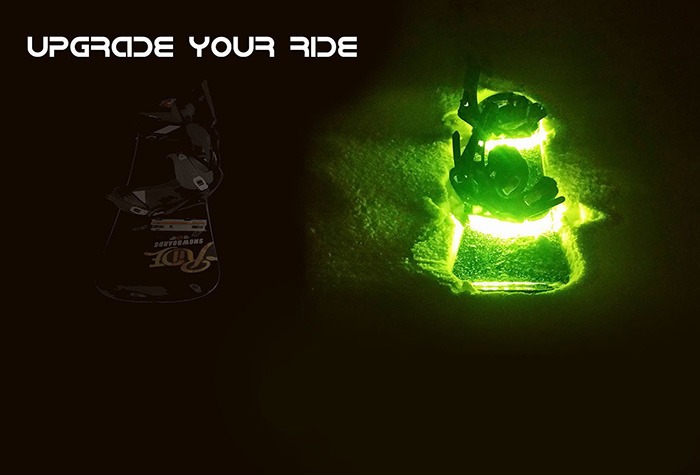 The LED Snowboard Illumination System are remote controlled, waterproof LED discs that broadcast a powerful 2,000 lumen ring of color. They give a 360 degree illumination. With these, you would never have to snowboard in absolute darkness again!

Polycarbonate is a high-performing thermoplastic that is widely used in the building and construction of products, from windows and skylights to exterior elements for LED lighting. The LED Snowboard Illumination System is made with this indestructible material to ensure its longevity while also enhancing board flex. 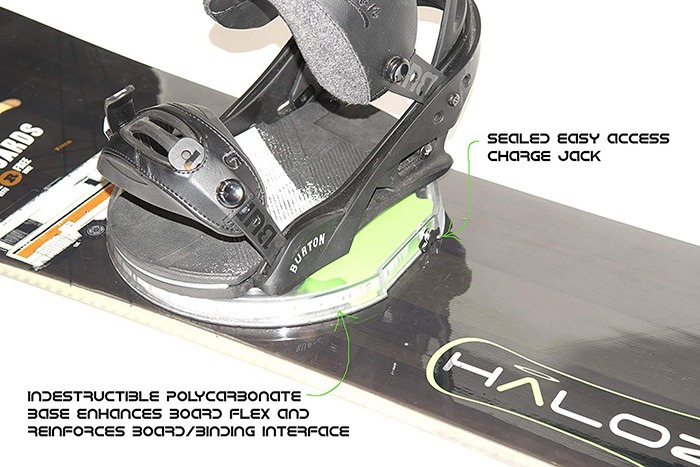 Be in control with the remote control that the LED Snowboard Illumination System comes with. You do not have to stoop low to touch it before you can control it.

The system is designed to allow ease of installation into a snowboard. The lights mount right underneath the binding with 4 screws that come with the package. No hassles! 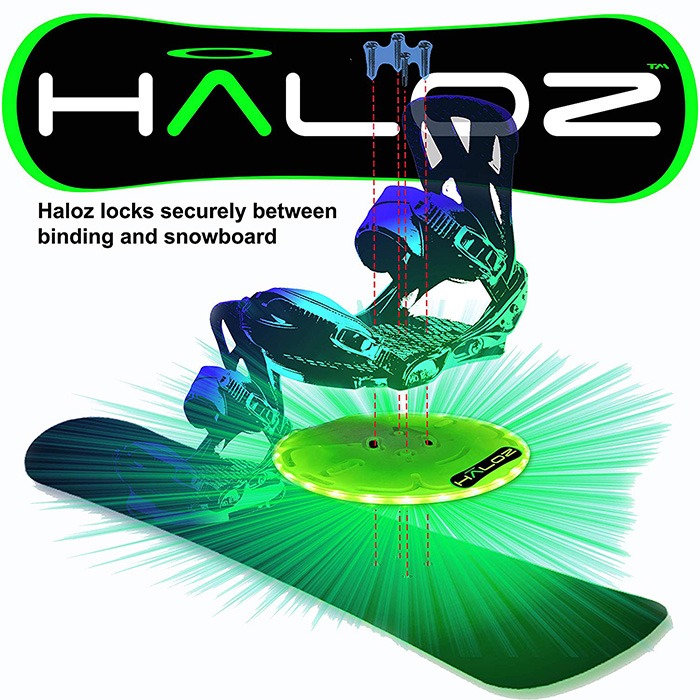 You have the rainbow at your feet with this amazing LED Snowboard Illumination System. The lights continually alternate so that you never have to be stuck with a color you probably won’t like. 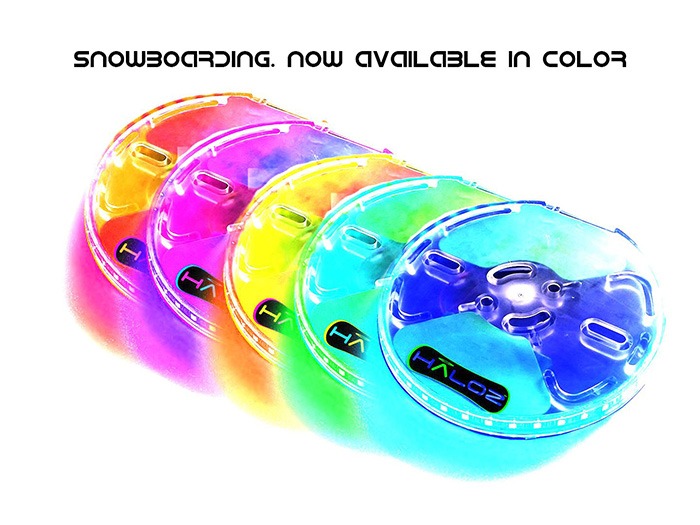 The LED Snowboard Illumination System broadcasts a 360 degree ring of light, however, it does not blind you like stick-on lighting kits would do. As a result, you can see and read the terrain better. 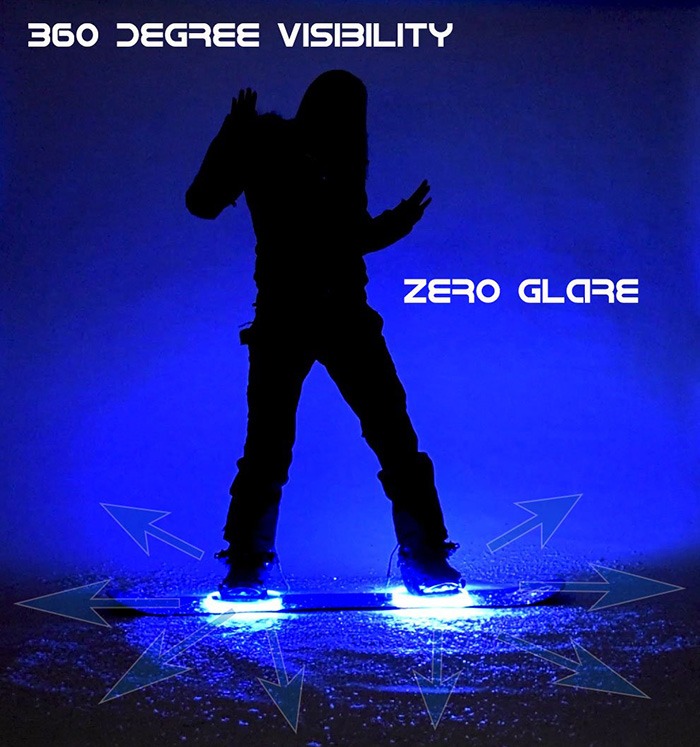 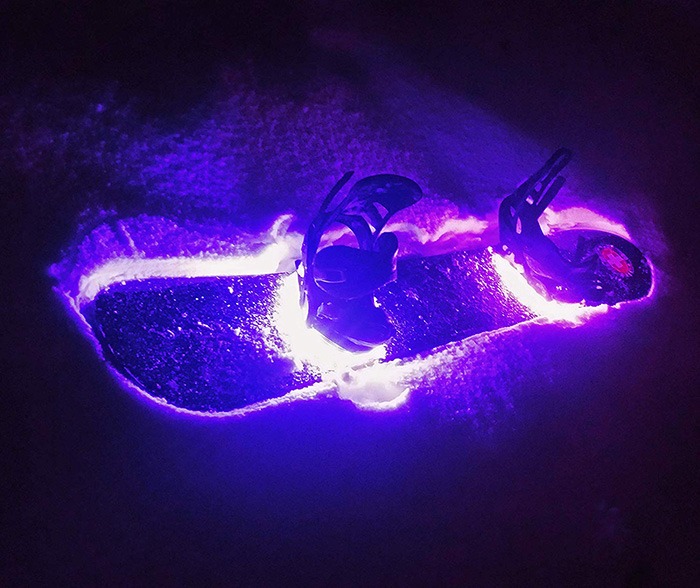 The LED Snowboard has an amazing 8+ hour run-time from two 2,000mAh 12v LiPO batteries. Have a blast for as long as you want!